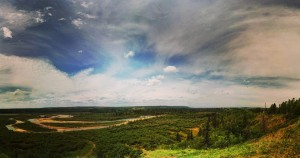 Preservation Society. Tough in that we had to face the fact that the province’s agreement

to proceed, come hell or highwater.

the Southwest corner of the Weaselhead very close to the main pathway, Beaver Pond and

the Oxbow, to accommodate the 90th avenue feeder route … and that we had absolutely

no say in this.

Weaselhead, whereas we would rather have seen the Elbow left in its natural state as it

eons will be permanently impeded by this freeway. We do NOT look forward to the

But it’s also been an excellent year for us, knowing that the Weaselhead has

become Calgary’s largest outdoor classroom, largely due to the committed staff who run

our outdoor Education Program, which has been soaring the past few years. Thanks to

our our dedicated field naturalists, thousands of Calgary students learn about forest

Excellent in that in May, we once again had a phenomenal turnout for our annual

spring clean-up with over 60 volunteers of all ages participating, leaving the park in a

years due to an out-of-town engagement, I was able to pre-organize things and leave it in

the hands of several Board members who ended up doing a stellar job. I can’t thank our

volunteers enough for their ongoing dedication and support for these programs.

groups, the 37th street Stormwater Trunk line will no longer be spilling directly into the

heart of the Weaselhead wetlands, because that the city has decided it is no longer the

right thing to do. They have clearly stated that they will be moving the spillage area east

of where they had originally proposed. This is a rare “win” for the public, when a

government admits it is wrong, and looks at other proposals which will cause less

And finally, excellent in the fact that we have such a knowledgeable, competent

(and may I add very pleasant to work with) Executive Director in Sarah Nevill. It is

indeed an honour and a privilege to work with her, and such a fine Board of Directors, as

participate in our activities.

natural area, so that our children’s children, and generations to come, will be able

to enjoy, explore and appreciate this urban paradise.

I want to end with one of my favourite quotes, which is painted on a mural in one of the

main halls of Louis Riel school in Oakridge, and that is:

“In the end, our society will be defined, not only by what we create,

but by what we refuse to destroy.”