The Society is pleased to announce that giving the pedestrian bridge across the river in the Weaselhead a name:  the “Barry Erskine Bridge” has been approved by Calgary City Council. This follows months of gathering support from adjacent communities and three levels of stewardship groups. The proposal by WGPPS was initially passed at City Council late on Monday, July 20, but the official announcement was made at Council meeting on Monday, July 27. Mayor Naheed Nenshi, and Councillors Drew Farrell and Jeromy Farkas acknowledged Barry’s contribution to the City of Calgary before and during his terms on City Council. 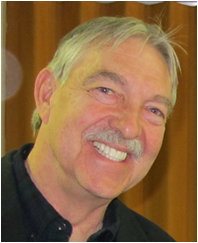 Calgarians grew to know Barry through his weekly Sunday gardening radio show where, for 30 years, he answered questions about everything growing inside and out. Barry sat on City Council, representing Ward 11 for five, three-year terms, from 1993 to 2007. Barry believed that everyone deserved to be heard, and he believed in the democratic process. One of the first questions he would ask a constituent who called his office was “Did you vote?” It did not matter who they voted for, or even if the answer was ‘no’.  He just liked to make the point about how important it is to exercise that privilege.

During Barry’s 15 years on City Council he was a passionate advocate for the environment, especially clean air and water, parks and pathways. He was City Council’s representative on the River Valleys Committee (now Calgary River Valleys) and the Bow River Basin Council. He was an early supporter of constructed wetland research to treat stormwater runoff in Calgary’s challenging climate. His initiatives with the Elbow Valley Constructed Wetland set the precedent for the stormwater ponds found throughout Calgary today.

Barry was a horticulturalist by profession and passion. When the Reader Rock Garden had fallen into ruin and was about to be demolished, Barry initiated work with the Calgary Parks Department and the Horticultural Society. They found the original plans for the house and gardens and worked to restore them to the jewels that they are today.

Barry was an early proponent in preserving the Weaselhead Natural Area.  He encouraged the formation of the Society and continued that support during his time in municipal office. The viewing deck on the pedestrian bridge in the Weaselhead Flats is a direct result of Barry’s influence while shepherding it through the planning process. The Society is honored to acknowledge his contributions to Calgary and its citizens by naming the Elbow river crossing in Weaselhead Flats “Barry Erskine Bridge”.